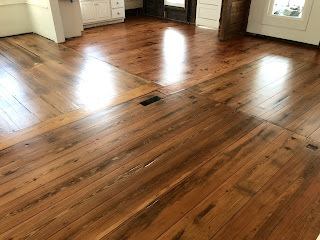 The floors are done.  OK. Bye!

[Insert gorgeous before and after pictures] *****oooooo -ahhhhh*****

Oh but things are never that simple.  When we bought the farmhouse we of course envisioned beautiful pine floors.  When we looked at the house for the first time, the floors were covered in the green monster.  After signing on the dotted line, we literally went straight to the house to pull up that stuff to see what was underneath.  After peeling off layers and layers, we finally revealed the heart pine wood floors throughout the house - in great need of restoring, but they were there! So to say we have been looking forward to this part of the renovation project is an understatement. 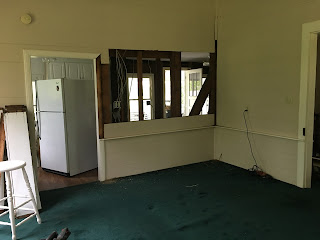 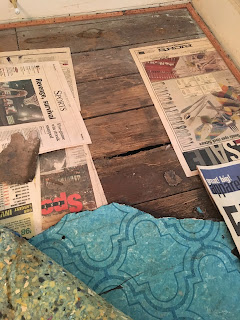 The kitchen was the worst section in the house (Wonder why? Are you seriously hungry AGAIN, man and children?) (I'm thankful to be able to feed y'all and everything, but would anyone be open to converting to raw vegan? No cooking and less cleanup, just saying.) Moving on...  The next worst part was around the fireplace, but looks like those boards had already been replaced once.  So, our floor guy recommended that we replace the boards in kitchen.  In order to save a dime we decided to go with new heart pine instead of reclaimed.  Our floor guy was nice enough to have some reclaimed milled for us and even delivered to the house for us to see it - all by mistake I may add.  Or was it a good sales tactic?  But we didn't bite - couldn't justify spending almost 5K just for wood! 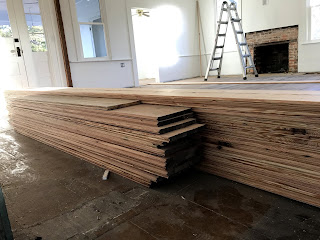 In addition to being replaced, the kitchen would also be reinforced underneath.  The rest of the house would just be sanded.

So, after we got the correct boards delivered, the guys got to work with all of the prep work.

While the foundation was open we took a moment to write our names next to a previous owner (John circa 1890's-ish) and remind ourselves that our house is "founded on the Rock." Matthew 7:24 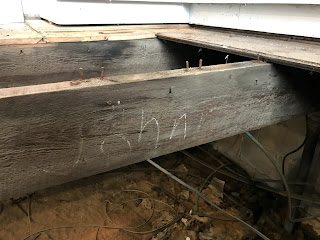 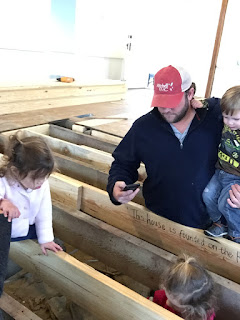 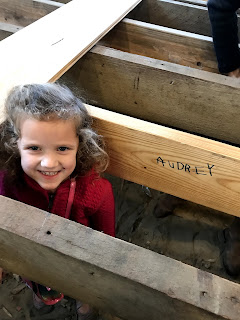 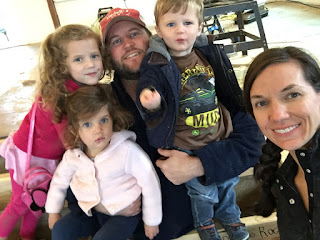 Then, they finally started laying the floor in the kitchen. 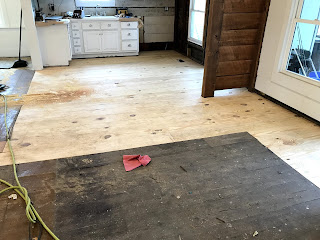 Then, they started sanding.

Now for the good (not so good) part of the story.  If you really don't care about technicalities of poly, stain, etc. then we won't be offended if you just scroll through the pictures.  And don't forget to ooooo and ahhhh.  Thanks.

So we had two challenges:

1) We wanted the original heart pine to look as natural as possible.  Matte (or less) finish, no added stain or color change.

I never in my life thought I would have so many dreams and sleepless nights about stains and poly.  That was a case of too much googling before bedtime.

So, for the first challenge -  we found out there are a few different types of poly.  Oil based and water based.  Oil based has an amber tint to it and that little bit of color in the poly will change the color of the wood.  We decided to go with the clear water based poly.  Challenge #1 solved. 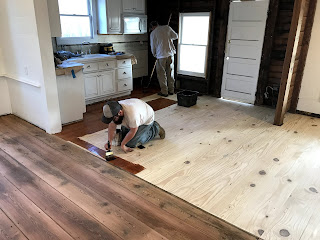 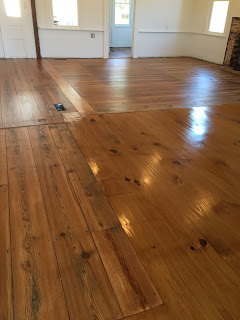 Round 3 - Color was right, but blotchy and uneven.  We discovered that this happened because the floors were unevenly sanded. It didn't show up before because they mixed stain with the poly to save time.  But this time to get the color more accurate, they applied the stain directly on the floors and would add the poly later once we got the color right.  Why didn't we do it this way the first time, you ask? You're asking the wrong person. 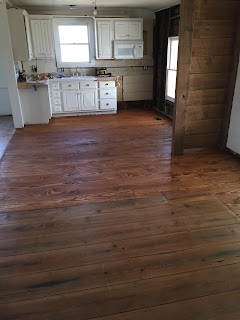 After we got the color right they had to apply three or four coats of the clear water based poly to the whole house, buffing in between each until the last coat.

After that last coat, we hugged, shook hands, thanked them for working with us to get the color right.  Hooray.  We were done (or so we thought).  The guys came to do the last coat of poly on the whole house and when it dried all of these tiny air bubbles were left.  Face palm.

So, they had to come back yet again and sand all of the bubbles down and reapply the poly.  They said this happens from time to time and explained that it must just be a defect in the product.  The bubbles had never happened on any of the other coats of poly.  So it must have just been something with the weather or the poly itself.

They shipped the new poly in and finally, we are done. 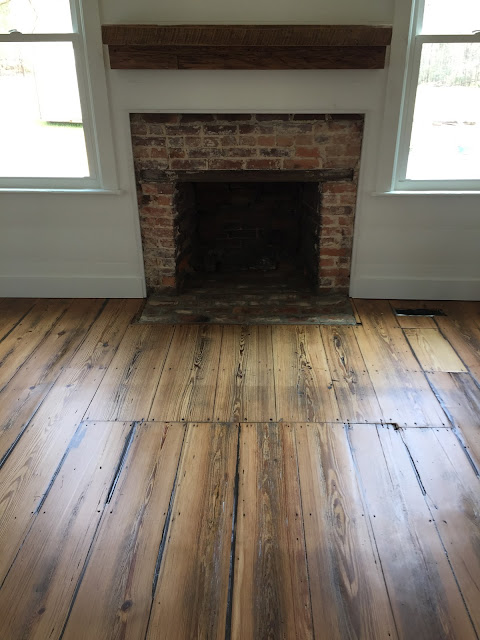 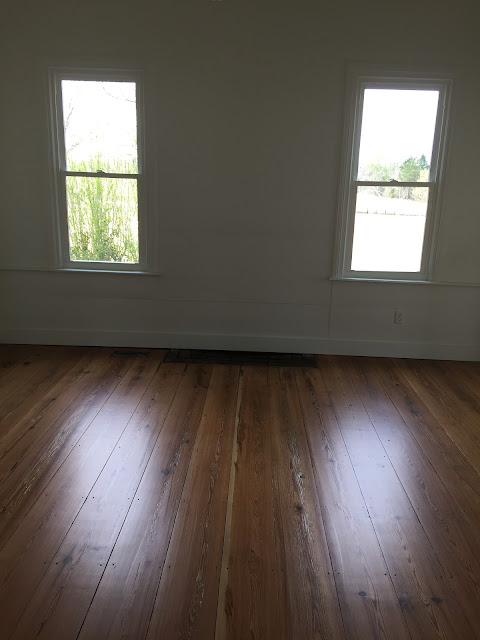 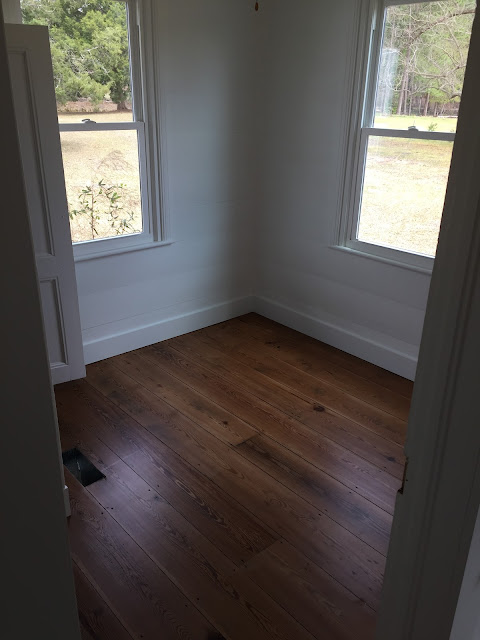 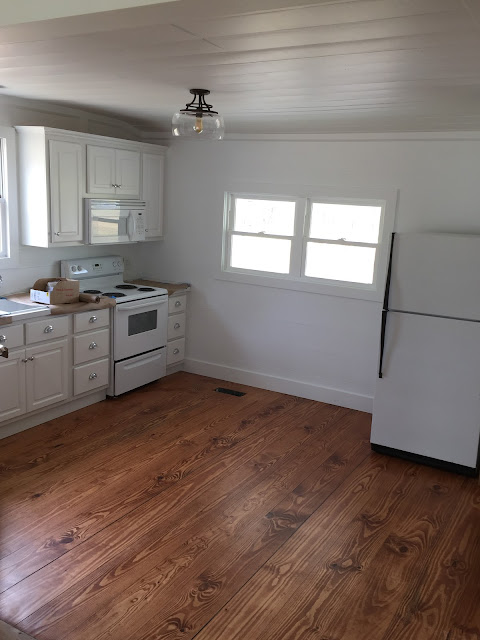 Let the dance parties, finger paint spills, hotwheel races, toy tractor driving and constant sweeping begin.  Can I get one of these please?


Labels: Fixin up the house