The lights went out in Georgia

The month of October has been one to remember for us. Or actually it was more like a blur.  Let's just say we didn't get to make much progress on the house.  Brett's parents live in Camilla, GA where his dad is the manager at Mitchell EMC.  Hurricane Michael tore through the area with historic wind speeds on Wednesday, October 10th.  We braced for the storm about three hours northeast in Twin City.  Thankfully a few limbs were all she wrote here.  Brett must have just had a bad feeling it was going to be rough in Camilla.  The next morning he kissed us all good-bye and loaded up his truck and trailer with coolers, ice, and food to go help however he could.

I heard from him only a handful of times over the next few days.  Little did I know what all he was actually doing.  He would get up at 4:30am and was on his feet all day until around midnight - cooking three meals a day to feed the growing number of linemen, and also prepping food, unloading supplies and doing whatever was necessary around the EMC.

I'll be honest, by Sunday, I was ready for him to come home.  Leave someone else to do the cooking!  On Sunday morning as I drove to church, I had decided, you know, I need to quit being selfish and complaining to myself that he's not here and I need to pick up and just go see him!  I realized that he is right where he needs to be helping his parents and the hardworking linemen.  Then our minister preached on how it's so easy for us to make excuses not to help in times like these.  I was telling myself that I was doing my part by keeping the home front going.  But that message was just the extra kick I needed to start thinking about what our community in Twin City could do to help.

Within a few days, our community had donated $3,000 to be used for meals for linemen and those in need throughout the community.  Folks let me use their coolers and trailer and we filled it full of supplies - water, gatorade, canned goods, hygiene items, snacks, casseroles to feed 400 for dinner and breakfast from Honey Cafe, chips and salsa from El Mariachi, chili and baked goods.  What had started out with me thinking we could get a few folks to bake casseroles that could help Brett out with cooking for the linemen had turned into our community going above and beyond to create a load so heavy that I had to take the jack off the trailer so it wouldn't scrub. (Because I may have almost gotten stuck pulling into the Sugar Bowl to pick up the donuts - although not a bad place to get stuck, but not part of the plan!)

So, Audrey and I were off.  Well, I did forget to close the trailer door going from Holden's in Twin City around the corner to the preschool to pick up Audrey.  My family likes to call these "Janna moments" since I'm not blonde.  Thankfully we didn't lose anything - that I know of! And THEN we were off. 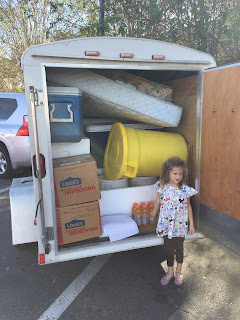 As 1 Peter 4:13-14 says, God's glory is revealed during tough times.  I'm sure these "trials" are minimal considering what others went through in the storm, but God works in the little things too.  While I was leaving Millen picking up the casseroles, I got a call from a friend in Twin City saying that her dad is a linemen and her Grandmother (having a heart for linemen) had gathered supplies from her church in Millen to send to Camilla.  My friend wanted to know if her Grandma could bring them to Twin City - I said, "Hold on I'm in Millen now!  I'll just turn around!"  When I got there, she said, "I prayed for a way to get these supplies where they needed to be!"  There were many more "it could only be God" stories from Mitchell EMC.  One night Brett said he had just ran out of food when a crew of about 50 linemen walked up.  Just then a guy from the community pulled in with 50 or so plates of chicken and sides he had just made up from food from the freezer that he needed to use.  There ya go.  We were packing cookies for the linemen's lunch, when were about 60 cookies short.  In walks a lady bringing about 65 cookies already individually packaged for us to plop right in the box to send for their lunch!

Here are a few favorite pictures from my time there.

The chapter in Psalms I read the day before leaving for Camilla had a verse in it that was all too timely, "God is the Lord, and He has given us light."  Psalm 118:27  There are so many symbolic parallels (whoa, that sounded deep!) when thinking of Jesus, light and power.  But I think the image below says it all.  Does that power pole on the right resemble anything to you?  The cross gives us light...in our homes and our hearts.

Thank you to everyone who helped with the effort.  In addition to feeding the linemen and sending supplies, the additional donations we received are being used to purchase supplies for families in need of specific items after the storm. It took a little over two weeks for everyone to get their lights back on and for Brett to come back home.  But please continue to send your prayers to those who will be recovering for years to come.

Labels: Fixins for the Soul