When people ask Brett and me what the main thing is we miss about living in the Atlanta area, we usually respond with grocery stores (Publix) and restaurants (Pure).  I used to stop in the store three or four times a week and EVERY time without fail the bill totaled $35-40.  But, dog-gonnit I was sure to have purchased every random spice and specific ingredient that Food Network recipe called for.  In Twin City, our local grocery store closed recently and we only have Dollar General.  And since I don't want to feed my family Vienna sausage and cheetos (no offense, DG lovers, just personal preference here) that leaves Harvey's or Walmart in the next town over - about a 15 minute drive.  And just so you know, they don't carry marscapone cheese or triple creme brie nor do they have an olive bar or natural foods section!  As my Mama would tell me, we're in Twin City now Janna! Anyway,  I think it's a combination of the fact that there is not a convenient grocery store + three kids four and under + we are more budget conscious now = we hardly EVER go to the store!  I will do anything not to have to go to the grocery store and that includes using ice cream for my coffee creamer and tortillas for PBJ's.

One of the main things I've figured out how to do is to make-do.  As much as I try to plan ahead, most of the time I'm just winging it.  My mom is an amazing cook and has the reputation of never using a recipe (or improvising greatly due to the above-mentioned condition of grocery-store-itis).  She just eye balls it, ya know! As my Daddy endearingly says, "She won't ever make it the same way twice."  Thankfully, I've found that I inherited some of her traits.  So when I post recipes they are mainly for me to remember what exactly I threw in the pot so that I can have a better chance of recreating a dish if Brett gives it a thumbs up.  I also have learned to restock my pantry with the same go-to items over and over so that when I actually do go to the store, I'll have a better chance of getting the items I need to make an entire meal when I attempt to wing it.

Here's my take on a recent fall weeknight soup that was a hit!

1 pound ground beef
fajita seasoning (about 2  or 3T)
salt and pepper
Onion - chopped
2 cloves garlic - minced
1 4oz can green chiles - undrained
1 can black beans - drained
1 bag of frozen corn or 1 can corn kernels drained
1 can red enchilada sauce, rinse can with water to get all the goodness out
1 can beef broth
1 can petite diced tomatoes undrained

*Note, since I have finally figured out how to decently stock my pantry, I only had to run to the DG to get broth and tomatoes (The DG and I have a love hate relationship). I tried really hard not to have to go to the store by dicing a piece of tomato I had and adding water, but it really needed the extra liquid and flavor from the broth and canned tomatoes.

Brown meat - once cooked, drain off the grease.  Remove from heat and sprinkle with desired amount of salt, pepper and the fajita seasoning.  Stir and taste.  Add more seasonings if needed.

Heat up a large soup pot and pour in some of the grease you just drained. Add onion and saute for a 3-4 minutes until transparent.  Add garlic and cook for about 1 minute.

Now it's time to start opening cans and dumping in.  Pour the meat into the large pot, followed by the rest of the ingredients.  Bring up to a simmer and let cook for about 30 minutes.  You can turn to low for a while until you're ready to eat.

We added sour cream and ate with corn bread - but you can eat it with what ever suits your fancy - just trust me and don't make a special trip to the store for tortilla chips or sliced green onions!  It tastes just fine like it is! 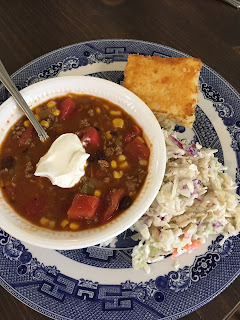