Better stay up.  A few weeks ago our crew got busy measuring and putting up the ceiling in the dining room using old boards taken down from elsewhere in the house.  If you'll remember, we removed the blue ceiling boards in the dining room to be used for our kitchen island, so we also had to buy a few new boards since we ran out of boards long enough for the ceilings. 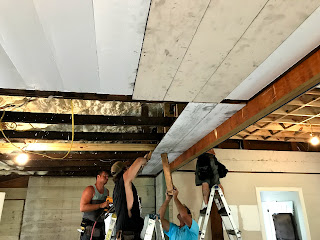 And since we can't have a blog post without at least one appearance of a baby or two...

Notice the grid below. 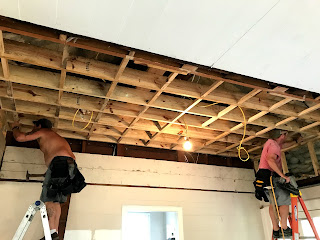 If you're thinking that's not how you normally build joists for a ceiling, then you're exactly right.  This is a new method called the we-changed-our-minds-on-which-direction-to-run-the-boards-can-you-fix-this-please technique.  Not necessarily the best way to start the morning off.  But thankfully I brought donuts, so the guys weren't upset too long.  What had happened was... we had our designer meet us at the house to look at the ceiling.  We originally had planned (and built the ceiling joists accordingly) to have the boards in the foyer match up with the direction that the boards were running in the living room.  We would cover the seem with a 1x4 or 1x6 board and paint everything white. After we talked everything over, we decided that the boards should run longways with the foyer so that the foyer space would be subtly defined.  The designer also recommended installing a faux beam and crown molding throughout to define the space even more. It may seem like we're splitting hairs, but I think the outcome will be a better look!

Today is a two for one blog post day. We have lots to catch you up on!  Fast forward to last week.  We had the guys come back to install the molding and trim and a few other odds and ends.

Remember the bees?  Brett had to take down most of the boards on the front of the house to remove the largest bee hive known to man.  While the guys were here, they put the boards back. 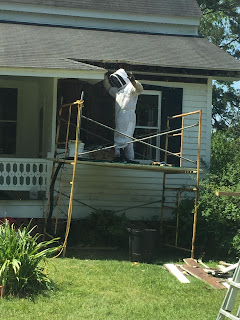 If you need us, we'll be busy cleaning, priming and painting.  Grab a brush and come join us!  The hardwoods are scheduled to be refinished in about three weeks.  Our new/first goal is to be in the house by Christmas!  We have hesitated committing to a goal aloud because we didn't want to be disappointed, but based on what's left to get done, we think it's doable!