Let there be Light

Thankfully when we purchased the farmhouse, it had been updated with central heat and air, plumbing, and the electrical had been installed and updated again to code in the last 20 years or so.  The shiny new wiring must have looked appetizing.  I'm not sure how we didn't find any squirrel skeletons in the attic after how much they ate through all of the new wiring. (I took Brett's word for it since I haven't been itching to crawl up there).  So needless to say, Brett had some updating to do. 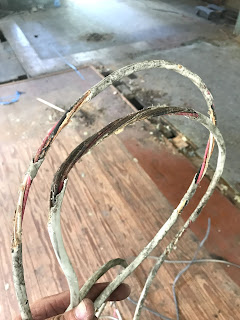 Plus, after we took out the walls downstairs, we needed to rework the outlets and switches in those walls.

We added some outlets here and there, four outdoor flood lights on the corners of the house, ceiling fan plates to the front porch and a couple of outlets on the back porch for us to use to hang fans (the ceiling is too low and it's angled so we can't do ceiling fans there). 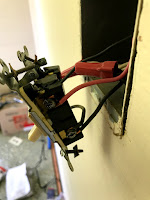 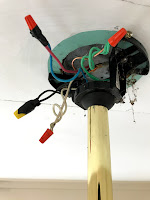 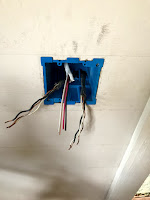 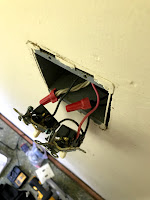 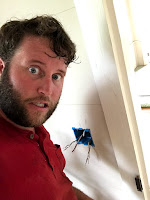 
Can we just pause a minute and have ourselves some church?   Raise your hands and repeat after me: WE PRAISE YOU LORD FOR ELECTRICITY AND AC! AMEN!  You may be seated.  Really though, could you imagine living in a house in South Georgia with no electricity for lights and AC?   It's so easy for us to take for granted life's modern conveniences.  As I've thought about the farmhouse and imagined the first family to live there, I know that life for them was very different from what it will be for us.

For you history buffs, I Googled a few interesting facts for you:

- Gas lamps were used in 1800s before the lightbulb and electricity
- The lightbulb was invited in 1880 - church resumes: PRAISE THE LORD FOR MR. EDISON
- In the late 1800's the fan was invented
- 1902 AC was invented
- By 1925, only half of Americans had electricity
- In 1936 the REA was passed, which allowed member owned cooperatives to purchase power and disttribute it to farms, ranches and other rural places.  (Hat tip to Brett and his dad, both in the electric utility industry)
- By 1960 most of the country was lit up

So, before all of ⇑ happened how did people stay cool?  Ah, I knew you were going to ask me that so I Googled (here, here and here) a few more facts for you:

- Houses were built with high ceilings (heat rises)
- Porches were added to take advantage of the breezes
- Most had ice boxes, humongous ice cubes and there were 19th century versions of Kristoff (Frozen anyone?)
- People had strong forearm muscles used for fanning themselves and then lived in front of the fans when electricity and fans were invented
- Kitchens were not built as part of the main structure of the house (in case I need to explain: coal burning stoves, steam, heat, and the tendency of women trying to do 1 million other necessary things meanwhile slightly overcooking the food)  (Believe it or not, it wasn't because WOMEN JUST NEEDED SOME TIME ALONE IN THEIR OWN SPACE, or was it?)
- People kept windows open to create airflow inside
- People built dogtrot houses with a central breezeway...again, common theme - airflow
- Houses were built facing the north and south, so no direct sunlight
- Folks planted trees on east and west sides to take advantage of shade

I'm sure you smarty pants friends knew most of this, but just wanted to share some reminders.  Our house literally checks all of those boxes.  Unfortunately the kitchen must have burned down because ours isn't there anymore, so if you see me sitting on the roof when you drive by, it just means I needed some space.  Maybe because we have all of these cute helpers.  If the light switch by the door ends up operating the blender, now you know why. 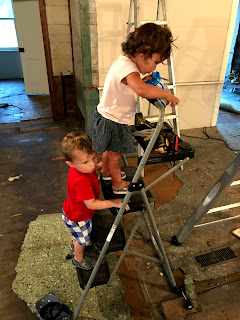 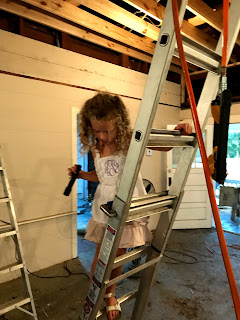 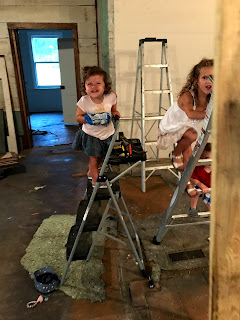 Here we are admiring Brett's handiwork.  Let there be light! 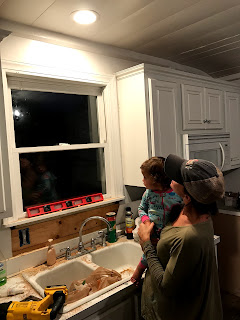 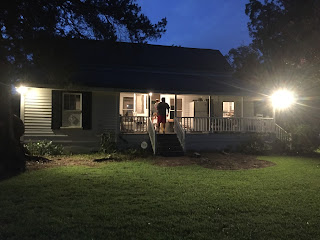