We are not having any more kids, OK.

You know, Joanna Gaines and I have a lot in common.  We really are very similar. We have the same design talent, business smarts, sense of humor, perfect skin, fashionable style, and cooking ability.

If you aren't sensing my sarcasm apparently my writing has been too serious lately.

But really, I have found a new appreciation for Chip and Jo, their story and farmhouse renovation.  During bedrest and the life changing perspectives, we stopped watching tv and got rid of cable.  Too much negativity and besides Last Man Standing there seemed to never be anything good on.  Whatever happened to shows like Family Matters?  I'm sure there are some good ones out there but we haven't watched enough lately to know.  Anyway, I started reading a lot more and subscribing to blogs.  My cousin sent Chip and Joanna's book for me to read - honestly I knew they were wholesome but I didn't realize the love for Jesus they had before reading the book.  And since we bought the farmhouse, I have been inspired by her blog.  I went all the way back to the first few posts of hers from back in 2012 before she was even noticed by HGTV.  This one about farm animals sounded very similar to the adventures of our family last week.

Our dear cousins who keep our dog and chickens while we are out of town left to go to Costa Rica (fancy!).  They asked us to return the favor for their animals: a baby goat, chickens, rabbits and a dog, so endearingly known as the funny farm.  A few weeks ago, right after they purchased the kid, it got out and they chased it around town to no avail.  A few days later a nice gentleman returned it to them who had been keeping it in his fence across town (Twin City is small, so maybe .75 mile away).  Have you ever heard of FORESHADOWING?  Apparently I don't quite grasp that concept.

Sidebar: What is the big deal about goats, anyway? They are cute and all, but honestly, if you're not going to sell/use goats' milk, I really don't know what purpose they serve besides keeping your grass mowed (which is still a pretty useful purpose).  I need to Google more about this as I'm sure God designed them for a specific purpose.

Back to the story: Brett's parents and brother were visiting town and the guys were all at the new house.  After a donut run, Brett's mom, Audrey, the babies and I stopped by to check on the animals.  I started with the goat.  I could do this.  No prob.  She was so cute, peaking out at me in a little white barrel. While trying to sneak in to grab the food bowl, I didn't shut the door behind me.  Did I mention that baby goats are REALLY FAST?  She bounded out at the first shot and was off in the yard.  THEN, only THEN was when I remembered the family's unsuccessful efforts of catching the goat a few weeks ago.  Oh no.  (That's not exactly the words I used, but we'll go with it.)

The goat frolicked to the other side of the yard.  I managed to coax it under the carport while calling Brett for reinforcements.  They drove up and I pointed to the carport.  We were good.  We had it cornered.  Did I mention that baby goats are REALLY FAST?  She snuck out underneath the ranger and headed for the road.

I will save you the drama that ensued over the next 20 minutes (What seemed like 2 hours) of us chasing the goat (I don't even know if she has a name) up and down the highway through the middle of town.  I can't take credit for this - Audrey and I were walking since they left us.  Brett, his brother and Dad surprised the Methodist Church pastor's wife in her carport and she opened the gate to their backyard and they cleverly coaxed him (I actually think it's a him, horns) in.  Audrey and I walk up to see this:


And after a few minutes, Brett's dad corners it and VICTORY!  We have the goat back in our possession.  To top it all off, as we were crossing the road, a lady stopped and yelled out, "Are y'all carrying a goat? I have one in my back seat!" Brett yelled back, "Don't roll the window down!"  She replied, "It's in a crate, because don't you know that goats are REALLY FAST?" 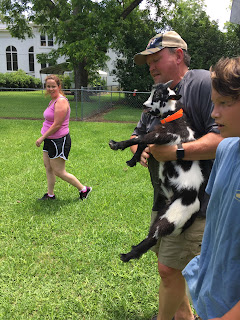 So I can imagine how Joanna felt (since she and I are basically the same person) but she had multiple goats to catch!  So, stay tuned for more Twin City happenings and I'll let you know if we change our minds about having more kids.

Labels: Fixin stuff on the farm