Chickens seemed like an easy pick for our first venture in raising farm animals.  Not too much maintenance and they practically make you breakfast every morning.  We'll take seven!  A few hundred dollars later and several months went by and turned out our seven hens were five roosters, one hen and one chicken dinner for Lumpkin, our chocolate lab.

We kept one rooster (because he was pretty and I thought we needed one).  Found out that they don't just crow in the morning, they crow whenever they feel like it (ALL DAY).  Which was ok, but when your daughter doesn't want to go outside because she's worried about the Daddy Chick getting her.  That was NOT ok.  He was super aggressive towards all of us.  When we had enough, we sent him to a new home, but not before he fertilized some eggs for Mama Chick to sit on.  We went away for a long weekend and forgot to have someone get the eggs.  She decided to start sitting and the mama side of me wanted to let her instincts play out.

I know this has happened billions of times in all of history, but new life is still a MIRACLE every. single. time.  Case in point, our Mama Chick started sitting on four eggs.  Three of them vanished one by one - we don't know if she ate them (can that even happen?), or a snake or rat got them.  But here she is sitting on the lone egg.  Twenty one days she sat and would get up once a day for a leg stretch and a snack. 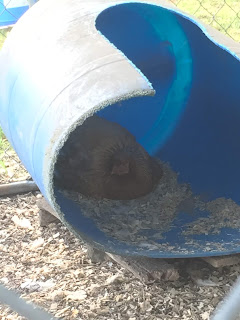 Around the 21 day mark we started picking her up off her egg to check.  On the morning our baby chick was found, I picked up the Mama, heard the chirping, but saw no baby chick!  The Mama was holding her!  The baby chick finally fell out and CUTENESS OVERLOAD.

Seeing the miracle of animal life like this first hand has been amazing plus it's fun to see the Mama Hen instincts play out.  She protects her, shows her how to eat and drink, keeps her warm.  (Notice I'm saying "her" - we don't know what sex the chick is but we hope we can talk it into being a hen.)

I know God speaks to us through nature, if we just stop to take it all in.  Psalm 19 says that the heavens declare the glory of God...day after day, they pour forth speech; night after night they reveal knowledge."  I think this verse is speaking mainly about the sunrise and sky but I think it can also mean nature in general.  Romans 1:20 says that God's eternal power and divine nature have been clearly perceived in the things that He's made.   I know this is getting deep for chickens, but point is, the simplicity of this Mama taking care of her baby chick is a reminder for me to slow down and let Him speak to me, to be a better Mama myself, to glorify God in all of His beautiful creation. 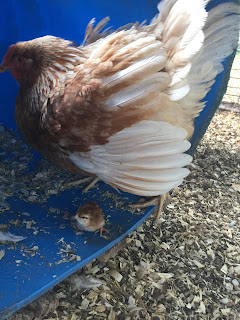 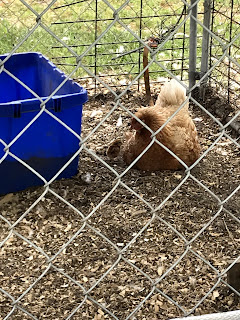 Labels: Fixin stuff on the farm Fixins for the Soul